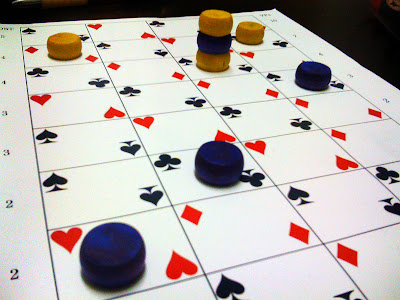 I had so many game ideas in my mind that like to be put out. One of the fantasy themed racing game called "Trial of Grandis" were printed out and heavily playtesting currently. It's a 2-4 players game, which feature Hand Management and Set Collection mechanics. Trial of Grandis will be available for download soon, as soon as all the rules are and design are finalize. Here's some intro and basic features that came with the game, which I have posted in BGG.
Intro
It is a time of wizardry and power. In the esteemed Academia Magicas, novices from the House of Elementas shall be given their final test: Trial of Grandis. As a Chief Apprentice of your Noble House, you shall lead a quartet of novices through a maze of primordial elements on the ancient Fields of Grandis to earn your Elementor ranks and stand as honoured Magi of Magicas.
Basic Mechanics
- Your objective is to win as much Victory Points (VPs) as possible, while striding through each terrain square to reach the end of the field.
- The Trial ends when all terrain squares at the finishing line are occupied.
- Each Player begins with 5 cards in his/her hand and draws 2 extra cards at the start of turn.
- Each Player may conduct a maximum of 3 movement/actions with his/her playing cards during a turn.
- Each Player can hold as many cards as he/she can in hand at the end of turn, but beware of the thief.
Cards
- There are 2 types of Cards that can be drawn from the draw deck: Scroll Cards and Action Cards.
- Scroll Cards are used for basic movement to each terrain square (see movement)
- Action Cards are special magic scrolls with extra spells such as VP Thief, Revive Mana and etc that can be used to your advantage.
Movement
- The Field of Grandis is a land of power, with terrains warded by elements that bars entrance from those who do not wield them.
- Fire, Ice, Thunder and Poison Wards of varying degrees protect each terrain.
- To stride the fields, you must be proficient in utilizing the Elementas Scrolls (Cards) to calm the elements of each terrain.
- You can move straight or diagonal to the adjoining square by casting your Scroll Cards according to the element and number of scrolls required. e.g. A square guarded by a Level 2 Fire Ward can only be entered by casting 2 Fire Scrolls (cards).
Victory Points
- The field is divided into sections, each section of terrain squares with their own VP value, ascending to the highest VP value at the finishing squares.
- At game end, only the VP value of the terrain squares occupied by each of your Novices is accumulated.
- VP Points can also be earned by performing the Lock Spell (see Lock Spell)
- Player with the most accumulated VPs wins the game.
Lock Spell
- When 2 or more Novices move into the same terrain square, the latest Novice to arrive at the square automatically performs a Lock Spell on the Novice(s) before it.
- Novice under the Lock Spell cannot perform any movement or action until the spell-caster moves away from the square OR the spell is broken with a Lock Breaker action card.
- There is no limit to the number of Novices occupying a square; the last Novice to enter a square will always be the spell-caster.
Trial of Grandis is a strategy card + board game with a minimum luck factor in drawing cards.
Free downloadable files (print & play game board, rules of play, etc) will be available soon.
Here's the link of photo gallery in BGG:
http://boardgamegeek.com/images/boardgame/69603/trial-of-grandis

Email ThisBlogThis!Share to TwitterShare to FacebookShare to Pinterest
Tag: Print and Play, Trial of Grandis