What I Think about Power Grid 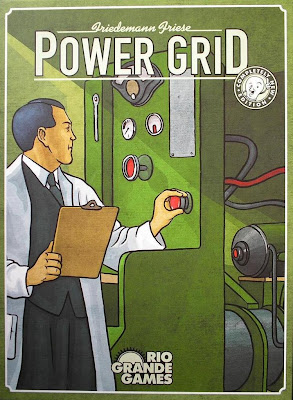 I used to hate mathematics while I was still at schools 'coz I'm suck in that. I always failed most of the exams, and I not sensitive to all those numbers stuff. But when it comes to real life, everything is in numbers! Your life spend, salary, buying stuff, counting victory points when gaming, etc.
Then why I pick up this game, Friedemann Friese's Power Grid? It's a mathematics board game after all, most of the gamers called that. I found out I love this game actually, not becos of its mathematics matter but it was quite a cut-throat game after all. The theme is OK but the mixture of mechanics are just outrageously genius.
My gaming group like to outbid others on the power plants auction phase, buy off all the resources in the current market if can or block off others during the network building phase. That's whats it's all about in Power Grid. The game is always tense and challenging from the start until the end and it works extremely well with whatever numbers of players you got.
The best strategy in Power Grid is to keep everything of yours in balance. The money, power plants' output power, city networks and even a single resource matter. You have to plan ahead and read your opponents' mind, very often. That's the key to achieve victory in Power Grid.
Most of the users in BGG claim that Power Grid is lack of player interaction, and I don't agree on that. My gaming group do make a lot of noises during the course of gameplay due to its gentle & subtle cut-throat level.
This is one of the most balanced game ever designed, it always allow the weakest player to act first and throw the strongest player to the back and go last, it letting the weakest player has a chance to compete with others. That's what most Euro Games are all about, no one gets eliminated during the course of game.
The box come with a nice illustrated double sided map board (USA & Germany) which allow you to play whichever you feel comfortable, one deck of weird size power plant cards & over 200 nice looking wooden pieces. I always like wooden pieces, it just feels great when holding it in hands, rather than plastic. The only complaint I have with Power Grid is the paper money, I just hate its cheap quality.
There is tons of expansions for Power Grid, but most of it are a game board/map, with some different rule changes. So, you'll never felt boring using the same map again. These expansions are cheap, so don't worry.
Lastly, note that Friedemann Friese's game are always green in color, he uses green a lot in his games, and even his hair is green in color. Punk is not dead! 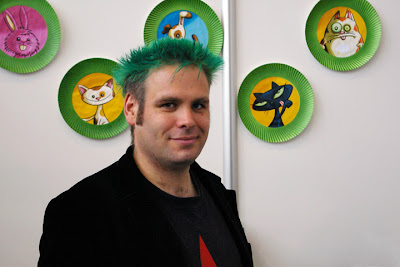 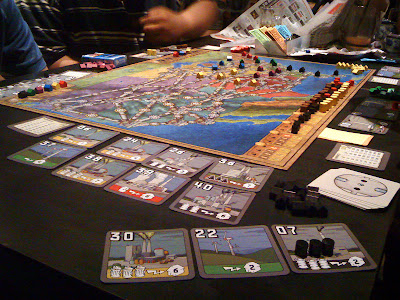 One of the most play game of my gaming group, play it whenever wherever if we have the time.
What my friends think about it:
Phang: Simply the best game I've played.
ET: I like cut-throat games.
EM: I like this game 'cos I always win.
Beh: I'm not a gamer but I would definately buy this game.
Adam: Yeah baby! It's Power Grid time again!
Chang Yi: Do I asked a lot of questions during the game? Sorry, I don't fully understands the rules.
Jeremy: This is a mathematics game and I'm good at it.
Tat: Wow! I didn't know there is such a economy game that is better than Monopoly.
Kultur: Capitalism!
York: I'm new to this, don't bully me, OK? (He wins in the end)
Junnu: Not that interesting, I feel sleepy.
Great review from others:
- Drake's Flames
- Board Games with Scott
- Hiew's Gaming Blog